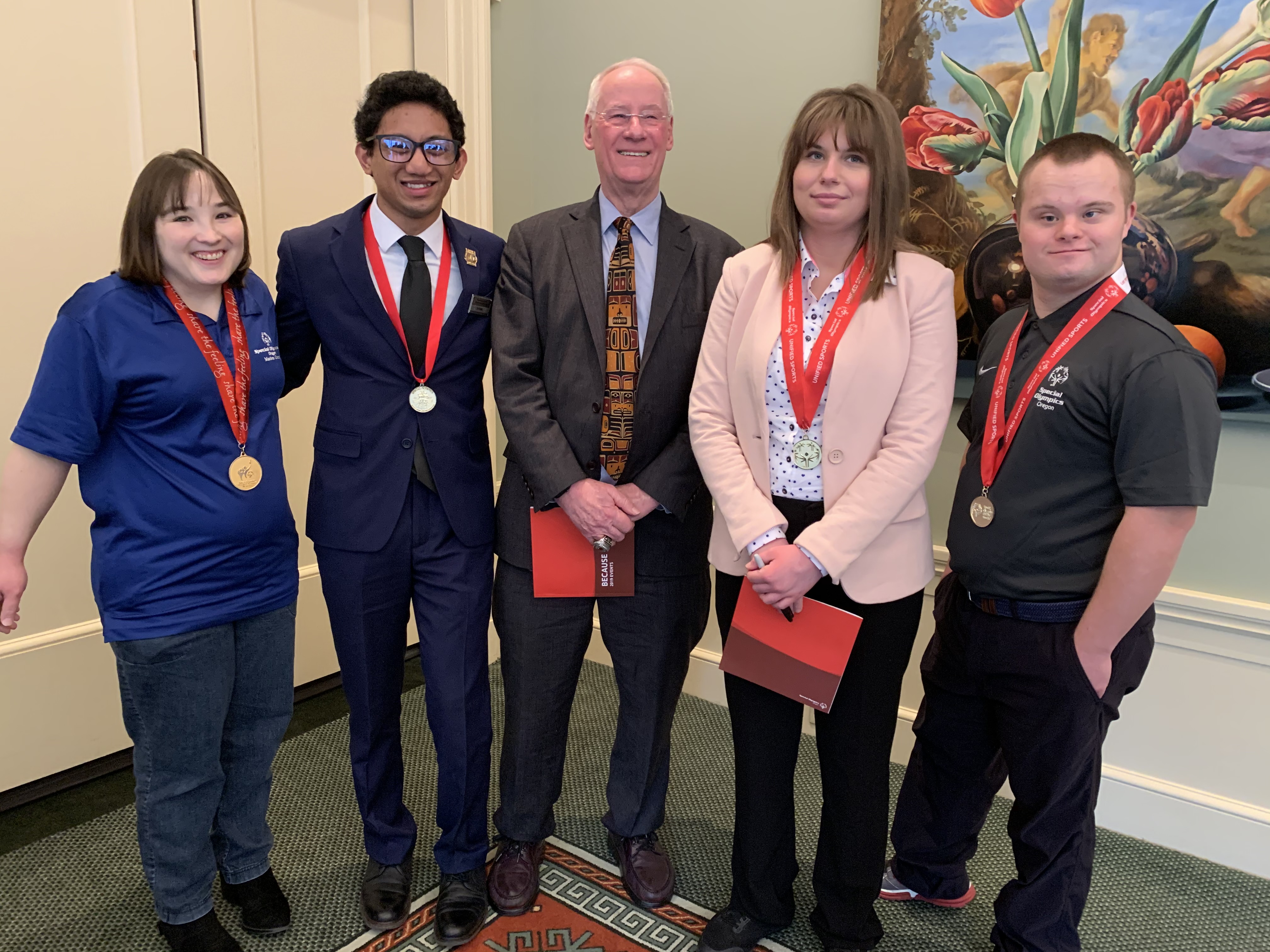 One of the first people I met with after moving to Portland to start my role as CEO of Special Olympics Oregon was Dr. Ed Ray, President of Oregon State University.  After referring to him several times as Dr. Ray, he finally said, “Stop it – I’m Ed.”

In many ways, Ed is a New Yorker through and through – cut to the chase, cards on the table, and never one to sugar-coat anything.  During a very difficult two-year rebuild of our organization with a global pandemic, wildfires, and civil unrest layered in, I could not have asked for a better person to partner with as Board Chair.  Ed demands excellence and countless times would say “failure is not an option” when referring to our commitment to the athletes.

I asked Ed what his Special Olympics love story was – how did he fall in love with this mission?  Ed had an old story and a more recent story.  Back in the 1960s, he was a college student at Queen College and Bobby Kennedy was running for U.S. Senate in New York.  Ed was in plays and was at the theater painting scenery for a production and he and others tried to peek in on the fundraising event.  Due to an odd configuration of the theater, Ed and two other students accidentally found themselves on stage while Bobby Kennedy was beginning to address a group of 1,500 people.  Mr. Kennedy heard the audience chuckle, spotted the students and invited them to sit in the reserve seats in the front row.  Outfitted in Dungarees, sneakers, and a paint-covered t-shirt, Ed and the others were informal for the occasion, but formally welcomed by Bobby Kennedy as  “special guests”.  He sat back and listened to a passionate speech about Special Olympics, an organization started by Eunice Kennedy Shriver that was in its infancy at the time.

In 2014, Ed’s wife, Beth, was honored at the Governors’ Gold Awards (which benefitted Special Olympics Oregon) and shortly after, Ed was asked to serve on the Board. He was reluctant because he knew as President of OSU, he did not have much control of his calendar.  There were periods where he and Beth would not have dinner alone together for two weeks or more – people to see, places to go, travel to be done.  Beth did not mind – she was supportive, dedicated, and loved being around the students, which is how the Student Success Center ended up with her name on it.

“When I get involved, I get involved”, Ed said.  It became clear that Newberg was becoming too small for the Summer State Games.  Ed felt that if he talked to the Athletic Director and Coaches, OSU’s Reser Stadium could be a wonderful home for the mission’s most important event.  Scott Barnes (Athletic Director), Coaches, and athletes were excited indeed to welcome the Special Olympics Oregon athletes to their campus – and Ed said it is how he became hooked for life.

Beth had physical challenges and Ed noticed that many people have a way of being oblivious to those around us who have special needs and often treat them like an inconvenience.  Ed saw Beth in situations where it became clear to him, even if they were not intentionally rude, people viewed it as a hassle that accommodations had to be made for her.  He recognized that people with mental and physical challenges and their caregivers and family can feel a sense of isolation and assumed many athletes or families of athletes probably had similar experiences.  The Games at Oregon State University brought Ed closer to those families and he was delighted to be able to see them with each other talking, connecting, rooting for each other’s kids – “it was magical”. They were genuinely happy.

At OSU, the athletes had an Olympic village in the residence halls where they could stay with their fellow athletes.  “I remember a mother came up to me on Saturday and said that her daughter came rushing in to breakfast to tell her that it felt just like going to college.  The mother was beaming because she was so happy”, Ed shared.  For the Opening Ceremonies, they let each county delegation enter alphabetically, except for Benton County because they were the host.  Each of the county delegations were led in by OSU athletes carrying flags. The flag bearers were OSU football players, basketball players, gymnasts – all proud to be honoring the Special Olympics athletes on their home field.  Ed’s smile was beaming as he recalled the singing, speeches, and dancing.

The entire city of Corvallis was excited – even Ed’s longtime barber, Brett at City Barber, got in on the fun by closing his store on Saturday and giving free haircuts to the athletes.  “We have to get back to Reser Stadium, Britt – the athletes and their families deserve to have that experience.  We will make it happen.”

Ed became the Board Chair for Special Olympics Oregon during a difficult period – we were going through a rebuild and there was a very real chance our organization might not survive it.  Yet, he agreed to assume the role of Chair.  Was he nervous or scared – after all, if we failed, it would be on his watch?  “I can’t ever remember ever feeling afraid about how people would interpret things, if I felt I was doing the right things for the right reasons.  I am very guided by ‘do the right thing’.  If there were reputational concerns, it was about the University versus me personally.”  Ed called his Board Chair and she offered her support if he decided to take on the challenge.  “I was put in a position where if I agreed to be the Board Chair, people and foundations were lined up with funding to help us get out of the ditch.  If I did not agree – they would not donate.  I was the only person on the Board these donors would support to turn things around.”

When Ed finally agreed, we were about a day away from shutting down entirely.  He reflected on that and said, “So what were the alternatives?  If I said no, it would certainly fail.  If I say yes, it might fail and sure, some people might blame me – but nobody that knows me or cares about me will blame me.”  Ed has been unwavering in saying that we cannot fail the athletes and he put everything on the line to ensure we did not.

I asked Ed how he would describe our Board and how it has evolved during his leadership.  “There were people on the Board long before I arrived who cared passionately about the athletes.  We have that now in spades.  Everyone is all in – these are people apart from whatever their skillsets are or how they are situated in society, who care passionately about the mission of SOOR – the athletes, families, and communities.”

“There is passion and caring, but also a sense of obligation and commitment to approach this with the appropriate business perspective and check off that certain things are being done in appropriate ways.  We need to be sufficiently on top of the finances and other aspects of programming so that we feel good about how the organization is being managed.  This is top of mind for everyone on the Board now.”

Ed shared that there are staff in our organization now who have been key contributors for many years – Mark Hanken and his team – and that he and other Board members know that the programming and activities are and always have been excellent.  We just did not have the right financial oversight or funding model to support that programming, which certainly was not their fault.

“One of the things I discovered early in life in a leadership position – transparency and openness is disciplining.  If you know that everything you do is subject to review – and I do not care who you are or how properly motivated you are – you will pay more attention and will do a better job.  You need to be able to explain and defend whatever actions or activities you have undertaken because you will be held accountable.  It (transparency and openness) has a disciplining effect on those who will be held to account and those who are held to oversight.”

Many people would give their right arm to have 90 minutes to ask Ed Ray questions and soak in his thoughtful answers.  I decided to have a little fun with him by asking some non-business-related, rapid-fire questions:

As our allotted interview time was ending, I let Ed know that one of the things I came to really admire about him is that he always takes the time to get to know the athletes.  His love for them comes from such a genuine place.  I asked Ed, as his term as Board Chair came to an end, what he wanted the athletes to know – what message would he like to share with them.  I was not disappointed:

“Before there is Special Olympics or special anything – they are special.  Each one of them is a unique miracle.  They should feel good about themselves.  They should think going forward about how they can make the world a better place.  How they can make other people’s lives more positive and meaningful for having known them.  If they can do that, nothing else matters. There are always people who will be more famous or people in history books – but who the hell cares.  It is what you do and the lives you touch that matters and it is as true for each of them as it is for everyone else.  Being clear about what matters is important so that you don’t waste your time on irrelevant things.”

“In terms of SOOR – there are a lot of things in this world that are good and bad and in between.  But connected to Special Olympics are people who genuinely care about them, who love them, and who understand how special they are – each individually.  People who are incredibly dedicated to helping them have happier more successful lives.  And so, anytime they run into a situation or people who are mean to them or who make them feel badly – they ought to remember that there are a lot of good people who love them and are there for them – and who will always be there for them.   Life is too short for hate.”

Ed, thank you for saying yes when this organization and the athletes needed you.  We are so grateful you will continue to be on the Board and remain in a formal role on our Executive Committee as Former Board Chair.  More importantly, you are forever a part of the Special Olympics Oregon family.