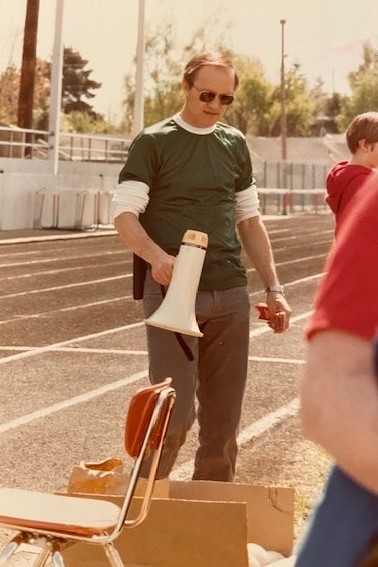 In preparing for our 50th Anniversary year, we’ve been retracing our roots, and our first story brings us back to 1974, just two years after SOOR filed its articles of incorporation.  We spoke with Janice Zyp and her daughter Cathleen, who added wonderful insight into the beginnings of SOOR.

Janice married Tom Zyp in 1970 and he started teaching special education, which would be his career for more than 30 years.  Tom was passionate about sports and active in baseball, basketball, and bowling at Pacific University. He also enjoyed refereeing basketball and umpiring softball.  Four years after he started his career, Tom began working with Special Olympics through the Hillsboro School District under Mike Sanford.

Tom and Mike did most (or maybe even all) of the fundraising for Special Olympics Oregon.  Janice recalled a partnership they created with Nike (also celebrating its 50th Anniversary this year and still in its infancy at the time) where they would receive donated shoes to use as fundraisers.  She remembered their garage being filled to the ceiling with shoes.  They would sell the shoes for $1 plus shipping to other Special Olympics programs around the country and she estimates that they sold more than 250,000 shoes!  It was a wonderful way for Special Olympics athletes across the country to get quality shoes in an affordable way, and for Special Olympics Oregon in Nike’s backyard to raise funds to benefit the local athletes.  Other fundraisers included magic shows at the Hillsboro Theater and even a Bill Cosby presentation in Portland, which was a big hit at the time.

They held their first formal competition at Pacific University.  The athletes had a ball, as did their families, and Mike and Tom decided to create an annual tradition.  They would recruit all of the kids in the program, rent a school district bus, and take a field trip over a weekend to Eugene for competitions.  There was a school bus driver who had a daughter in the program and would volunteer to drive for free each year.  Everyone would sleep in sleeping bags on the floor of a church, which was an entirely new experience for many of the kids – most had never spent time away from their parents.  They would compete on Saturdays and their parents would meet in the parking lot to pick them up after the event.

Janice laughed recalling how many of the athletes would gripe about the meals.  The athletes would raise money by selling ice cream in the cafeteria on Fridays, which was intended to cover their meals – so the more ice cream they sold, the better the meals!  She even remembered Tom attending a national competition with two athletes in Lansing, Michigan and said he was so committed to ensuring athletes had a meaningful chance to showcase their abilities and compete against their peers.

Cathleen smiled when she shared how much of her childhood was intertwined with her father’s work with Special Olympics.  When she was just 5 years old, she would stand at the end of the track races to high five the athletes and hand out ribbons.  In addition to track, she remembers bowling – still one of our most popular sports with the adult athletes today!

We asked Janice and Cathleen to look at SOOR today and think about how much the organization has evolved since their beloved Tom (and Mike) got it off the ground in Oregon.   They said that a constant ingredient is the amazing parental involvement – seeing parents advocate for their children really sets the course for a successful life.  Before Special Olympics, kids with intellectual disabilities were often hidden and sheltered.  After parents of kids who have intellectual disabilities found SOOR, the bonding between families happened quickly.  They would get together, interact with each other outside of sports, and it truly became a family.  She said that they still have five families that they are very close to whose kids went to Junior High and High School when Tom was there.

We wanted to know about Tom’s personality – and their description was exactly what we would have imagined him to be:  Tom was silly, he liked to laugh and have a good time, and he was a joker.  Everyone remembers his smart remarks – a very clever guy.  And, Tom loved his Special Education kids – he enjoyed being a part of their lives and watching them blossom and achieve goals.  Tom lived with diabetes and perhaps because of that, he had great compassion for those who had hardship.

Tom’s greatest hope for SOOR was to keep programming in the schools and he was the catalyst for getting kids in Hillsboro involved.  Many athletes would continue to keep in touch with Tom long after they graduated – in fact, she mentioned Tyler who would visit him every year and was so crushed when Tom passed away.  The Zyp family (Janice, Cathleen, Scott, and grandchildren) lost Tom on September 1, 2016, at age 70.  We extend our heartfelt gratitude to Janice and Cathleen for the time they spent sharing stories about Tom and his lifelong journey serving people with intellectual disabilities.  We are proud to thank and honor Tom Zyp among the 50 Stories of 50 Years.