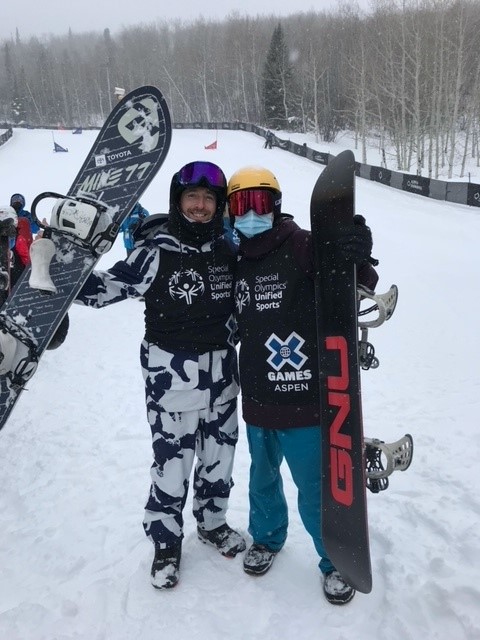 For his first four X-Games races, Henry’s Unified Sports® teammate had always been 2002 Olympic Bronze Medalist Chris Klug.  Together they teamed up to win 4 gold medals. However, in 2020 organizers switched things up.  Henry and Chris were assigned new teammates – so they competed against each other for the first time.  Henry teamed up with Unified partner Jack Mitrani, snowboard personality and X-Games broadcaster.   This new pairing proved to be competitive earning a bronze medal in a close race amongst the top three teams.  After a year off due to a COVID-19 hiatus in 2021, event organizers put in extensive health and safety measures to allow the Unified Snowboarding competition to take place again in 2022.  Meece and Mitrani teamed up again this year in hopes of another podium finish.  The field of racers was really competitive with lots of decorated athletes from around the country.   Henry and Jack finished in 4th place – just .1 second from the bronze medal position.  “I had fun in Aspen again this year.  I did not get a medal this time, but I had two clean runs and got to see lots of my friends,” Henry shared after the race.

Meece, 32, lives in Portland and trains on Mt. Hood with support from his mom, Nancy Newell, who joined him in Colorado.  Nancy explained the impact of Unified Sports, “Events like this create the optimal inclusion experience for Special Olympics athletes like Henry.  Sharing and competing with peers who love the same sport has enriched his life as well as our own.”

In 2018, Special Olympics Oregon was also able to send athlete Anthony Davis from Springfield.  Henry and Anthony have participated in the X-Games over the years thanks to funding from ESPN and Special Olympics International.

Congratulations to Henry on another great showing at XGames Aspen.  We are proud of all that you have accomplished on and off the slopes.